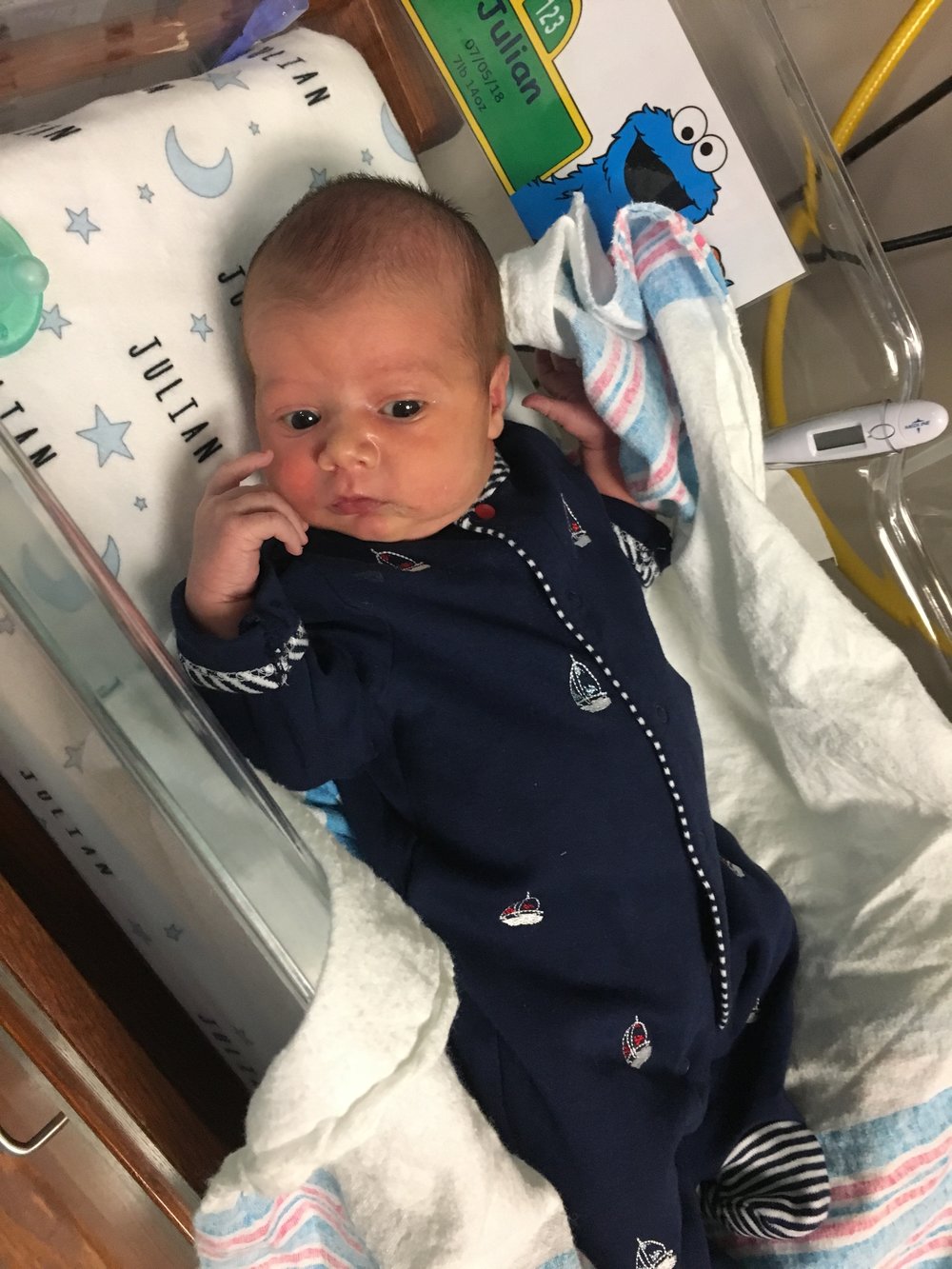 Happy Monday! Its been a little quiet around here lately. Quiet in the sense, where I haven’t been updating as much. But it definitely hasn’t been quiet in our household! In fact, our smallest addition is finally with us! So much can happen in 30 days, I think we plan so much that we forget that LIFE can change so quickly. We all know it does, but subconsciously we take it for granted. Not in a malicious way, but we do. I realized fairly quickly, that saying they tell you before you have kids: “Once you have kids, you never stop worrying” and boy, did this resonate so well with me this past month. Julian was born, and it was a pretty emotional and mental ride. I want to be as transparent as possible and share what Ricky and I experienced. I also want to share and make others aware of this “dusky” color change that is apparently something a lot more common then what is discussed, I think. * Warning: Long post ahead!

Yesterday made 1 month that Julian was born. He’s officially been home for 2.5 weeks. He was born July 5th. Lets begin by me saying how I am very happy that my surgery went great, everything was going according to “plan”, Julian was successfully delivered and was confirmed to be 8lbs 14ounches, 21 inches long. We had our touch time which was so beautiful, us 3 meeting having our little own moment. He was taken to get rechecked for his vitals, thats when, LIFE decided to change how the rest of the day was going to go. He was rushed to nursery for X-rays to check to see water in his lungs, they reassured me that it was normal and he would be taken to my room as soon I was done in recovery. I went to recovery, got my room 2 hours later. My husband enters my room over the moon excited to share that Julian will finally be brought to our room. Here, we go again with LIFE, that, unexpected change, Julian turned blue and was immediately rushed to NICU (Neonatal Intensive Care Unit) they call these episodes “dusky change”  which is when they lack oxygen and turn blue/purple in the face they require to be stimulated by being hit on the back and/or chest, or bottom of the feet. He was observed & treated closely by a great team in Baptist Childrens Health. The day I was cleared for my release which was Sunday 7.8.18 he unfortunately suffered another episode leading him to be kept at the hospital, he luckily did not change color or need to be stimulated he corrected his oxygen level on his own. However, every time his saturation in oxygen would go below a certain number (it was up on a monitor), they would call this a “desat”, when ever he has a “desat” they add 3-5 days on watch to make sure these episodes either don’t come back or subdue. While going back and forth to the NICU, my husband and I kept reassuring each other, that he might be in NICU, but he’s where he needs to be and all his exams are coming back negative with no medical findings. He was kept inside the incubator bed for a good amount of time & also went under phototherapy for bilirubin (slight jaundace), when he was finally able to be in an “open bed” that was a huge relief for Ricky and I.

While you are there you see other babies and families who are in there for other or sad/worse things. You quickly begin to realize that no matter how much you think your case is bad, there is someone out there who is suffering worse or don’t have any support. Overall, Julian is healthy and we are very blessed to have a happy healthy baby boy who was released on Wednesday 7.18.18. He was kept for 13 days he was observed, examined and seen by every pediatric sub specialty. All his medical outcomes came back negative with zero findings, that is what kept us hopeful for him to be out soon. Within that period Ricky and I completed a CPR video, and it was a good refresher and highly suggest for parents and who ever takes care of their little ones to see. We were finally released and got sent home with an apnea monitor to be used at night. The monitor that we have is similar to the idea of the “owlette”. It reads the heart rate, in our case he has to wear wires that are hooked to a machine, when a certain number hits in low or high, it alarms us. We then need to make sure he’s okay, no color change or trouble, we then  disable the alarm. So far, thank god all is smooth and we are scheduled to see the provider we need to in order to be cleared from the monitor at night. My only honest opinion about these monitors is that, its a gift and a curse. Its a good thing because you get alarmed, but a lot of the times when the alarm goes off its a false alarm, I think I woke up feeling like I was having heart attack every 2 hours when that thing went off. Now, I’m just straight mombie – a mom in zombie energy ha! Thank the caffeine lords for COFFEE!

On to “The Meeting” – Belle met Julian, and if I could upload videos on here, I would. (I’m sure you can, I’m still figuring out how to use the website fully HA!) Annabelle responded so adorable to him. Her initial reaction was: “He’s So Cute!”. She, like any other toddler has her days of showing us how those terrible two’s really are in full effect. However, over all though, she seems to be adapting pretty well so far, I mean its only been a month. I think she thinks Julian is a doll, which I have to be extra careful with. And, then theres moments she walks into a room and doesn’t even acknowledge him being there. So, id like to think, So Far So Good!

How am I doing? I get asked. Im overall pretty good I must say. My csection this time around was great, my blood pressure was maintained low, my healing has been great so far and I was up and walking the day of surgery. I joke now and say, I didn’t really have time to think about my healing because as soon as I was able to get up, I was walking up and down that hallway to NICU. I’d like to think that Julian pushed me to recovery faster for him and for all of us back at home. I gotta say though, Ive gone walking a few times but my diet has been HORRIBLE! The amount of sugar in take I have inhaled these past few weeks, I think could have made up for the LACK of sweets I had during the whole pregnancy. Ive cooked a few meals here and there, got my nails done and began to write this post. I tell myself small changes everyday, and ill find a rythm that works for all of us at some point lol at least Id like to hope I do!

So Much Change! But all good change! I try to stay positive as much as possible! Its not everyday, but its a conscience effort to be made everyday!

Hope you all have a great week! I’ll leave you with some pictures below! 🙂